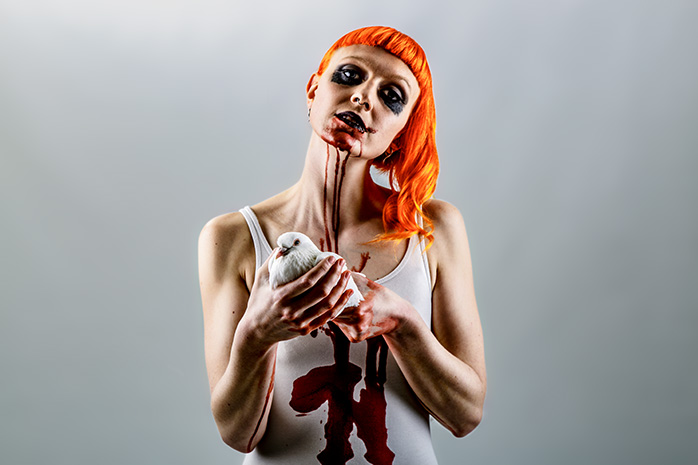 Mishkin is one of my talented friends in BirdEatsBaby and ‘Serephim‘ is her first solo EP.

She has a unique style created from her fan art which inspired this shoot for her new front cover. The Dove was hired in from Sussex Dove Release with a handler and had VIP treatment, he was so relaxed that he felt free enough to have a toilet moment on our star – who was professional as ever and the excrement only added to the shoot, as she was already covered in fake blood

Shooting wise I had 1 light bounced on the white backdrop. Then 2 x large softboxes opposite each other lighting Mish on either side, no front light, so we had some great gothic modeling lighting on her body. In post, after cleaning the backdrop, I dodged and burned certain areas of her, bringing out the tensed body and making the photograph feel more like a painting.

From model to actress Atalanta has been photograp

Load More…
From model to actress Atalanta has been photograp

My first gimbal shoot today, it's the start of a b

Brighton you are beautiful at 5am ❤ Shoot in Cam

Lighting test on myself today with a new ring ligh

Throwback! 2 yrs ago @lonnyvonpop and I created

In-between lockdowns I worked with @yameemandem to

@emmafieldendesign Is back and we have started sho

Testing our audio setup in the studio with @moa_th

A very lovely musican trekked over from Canterbury

The many faces of Culann Smyth How different ligh